Well as those of you who have been around awhile know we hosted a girl the summer of 2012 who set our hearts on fire for adopting from Ukraine. We thought that on that first trip to Ukraine we were bringing home her and Pasha.
The day before we flew from Houston to Ukraine we heard from a local friend there that our girl hadn't told her grandparents who she was still in contact with that we were coming for her yet. Long story short they found out and caused a huge scene at the orphanage because they thought she didn't really want to go with us. A lot of people there are wary of Americans, they think we adopt children to sell their organs or use them as house servants. We tried to bring her home that trip but were unable to. We did bring home Callen and Pasha and went home thinking of her and dreaming of someday trying again. 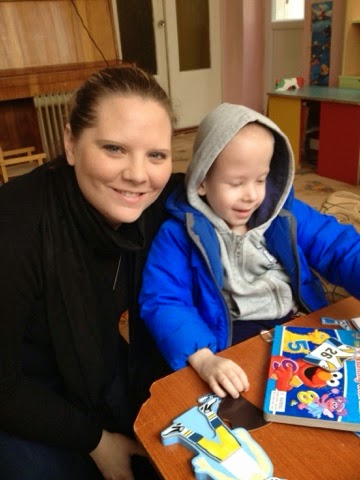 Here's me with Pasha at the orphanage in March 2013 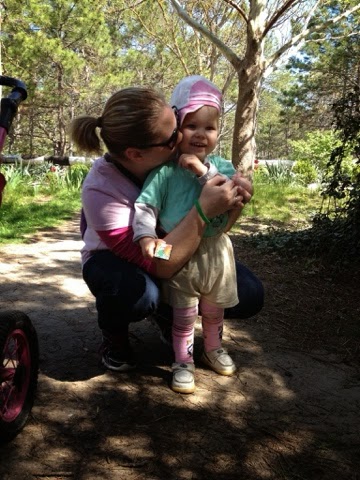 Here's me with Callen at the orphanage May 2013
During that trip we decided to start the process to adopt Katya and spent the next several months fundraising and doing paperwork to adopt her. We still heard from our other girl every couple of months and she still wanted to be with us. Over the months she told her family what her wishes were. We made plans to adopt her too. Sadly just a couple of months before we got travel dates to adopt the girls Russia invaded Crimea and took them over. Russia banned Americans from adopting from there in 2012......so this again ended our dreams of her being our daughter. 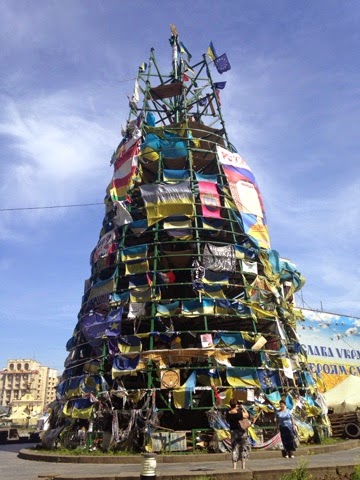 This is Independence square in Kiev June 2014
We have kept in touch with her but it's always been through other people passing messages and it was only every few months. Amazingly before Christmas we found out a team of Americans were going to her city on a mission trip. They agreed to take some money over for us to give to a local friend there who visits the orphanage. Our girl requested a phone that she could use to keep in contact with us. She was finally able to get it activated and set up a facebook account this month. Since then we have heard from her everyday and everyday she expresses that if given the opportunity she wants to be apart of our family. 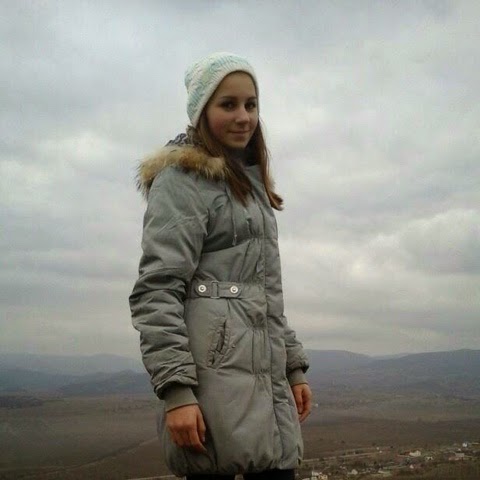 This is our sweet girl.
We only have a very short time to get the paperwork filed so if the opportunity ever presents itself we could adopt her. You see the US has a law that children cannot be adopted after the age of 16 unless you file certain papers and meet certain time criterias. Even if we get the papers done in time it's still a huge mountain we have to face of unknowns and challenges but all I know is that we fell in love with this girl and think of her as our daughter, no matter what.
Posted by Crissilea at Monday, February 16, 2015 No comments:

Wow it has been crazy around here since Pashas surgery in December. He's doing awesome!!! These were right after surgery I'll try to add updated ones soon. 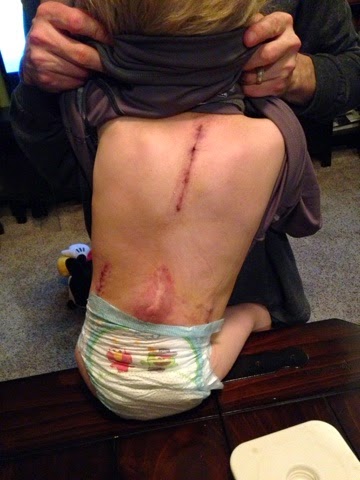 Christmas was great we had already booked a place in Bandera thinking Pasha would still be in the hospital in San Antonio. We took the kids to Sea World and enjoyed family time there at the guest ranch we stayed at. It was a nice break from our routines at home and all the kids enjoyed it.
The beginning of January Katya started complaining of a headache but was still eating good and playing so we gave it a few days hoping it was allergies or the remnants of sinus pressure from the cold she had the week of Christmas. Well after  5 days I took her to the ER and they decided it was shunt related so they replaced her shunt and put in an adjustable one. Well these things aren't an exact science so it took 2 weeks and 2 hospital admissions to find the right setting for her but since then she's doing great and is back to normal.
Ashlyn turned 12 in January and Lesia turned 17 that month then a week later at the beginning of this month Savannah turned 3! So we have been pretty busy, also Super Bowl weekend we brought home a 6 week old Great Dane puppy we named Sassafras aka Sassy.
Ok I think that's the short version of everything:) hopefully my next update won't take so long:) 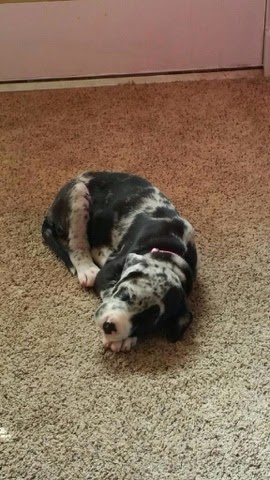 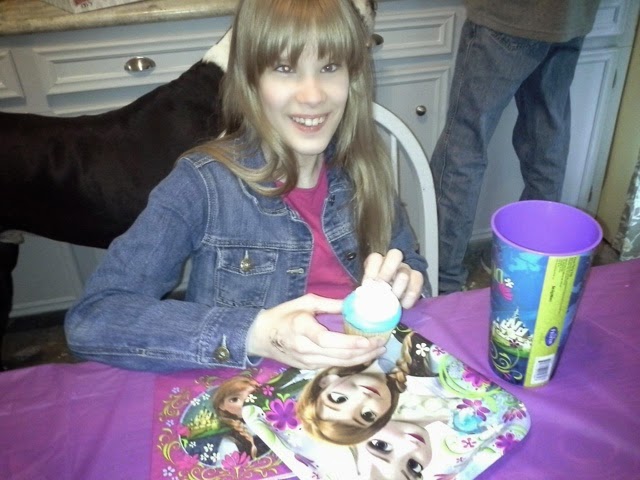 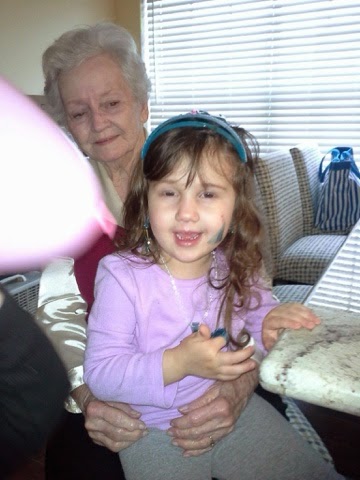 Savannah and my grandma 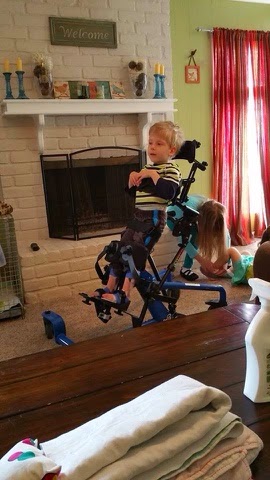 Pasha in his stander
Posted by Crissilea at Monday, February 16, 2015 No comments:

Pasha aka Grayson had the VEPTR surgery on Wednesday and was released Saturday to come home! He blew the medical team away with how well he's doing after surgery!  We bought a used bed to put downstairs for him because carrying him upstairs is very challenging now because we have to hold him very carefully now. He's eating good for him anyway and bossing his siblings around so I guess he's doing pretty good! 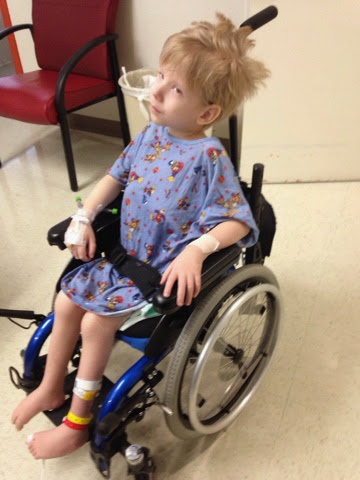 Sitting up in his chair for the first time after surgery
Katya's doing well too she's picking up more english everyday and learning more and more things she can do herself everyday too. She's really taken to Zeus and likes being "in charge" of him doing things like letting him outside and getting him water.
Callen has been getting good notes from his teacher almost everyday from school! At home he's doing pretty well too, he still is adjusting to a new sibling but overall he's making good progress. His FAS makes any changes to his life difficult to accept. It just takes awhile for him to accept new routines, like next year he'll be in school all day instead of half a day. I'm expecting lots of tantruming and defiance for a few months until he's adjusted.
The other kids are doing good too they're all excited for Christmas and have written/drawn their letters to Santa! My 2 biggest girls (Lesia and Ashlyn) are looking forward to no school so they can sleep in!
Posted by Crissilea at Monday, December 08, 2014 No comments:

Sorry it's been very busy in our lives lately. I'm in San Antonio right now with Grayson and Jared and in the morning Graysons having the VEPTR surgery. They are titanium rods that will be placed into his spine to help him grow. It's a major surgery and carries lots of risks but he needs this done to improve his quality and quantity of life. So please pray for his health....... 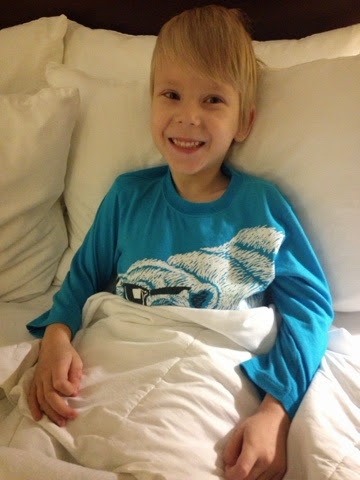 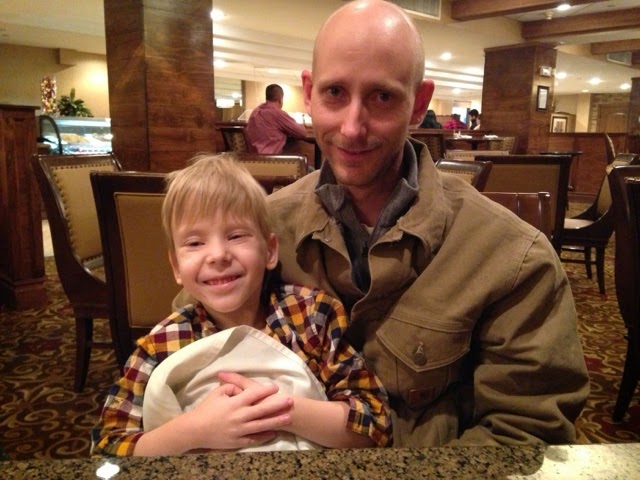 Dinner at the hotel 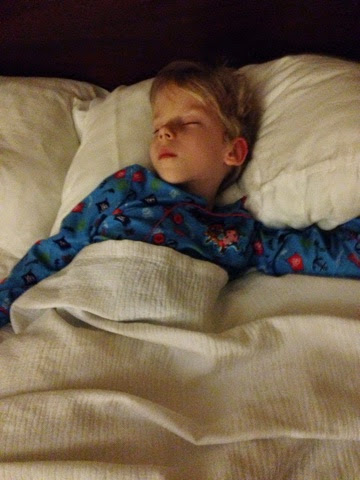 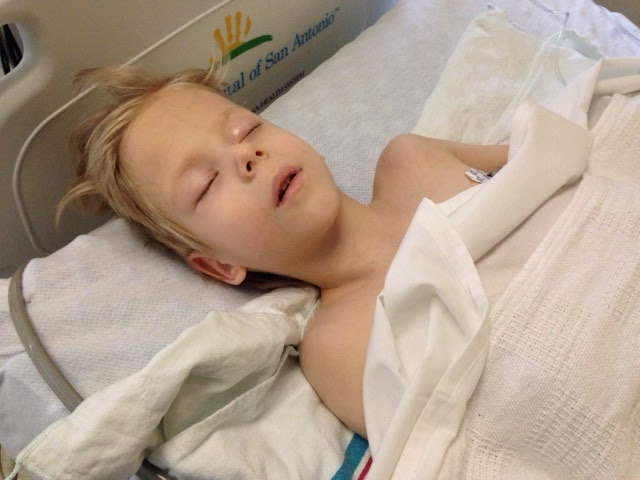 After surgery: doing great in the PICU
Posted by Crissilea at Tuesday, December 02, 2014 No comments: 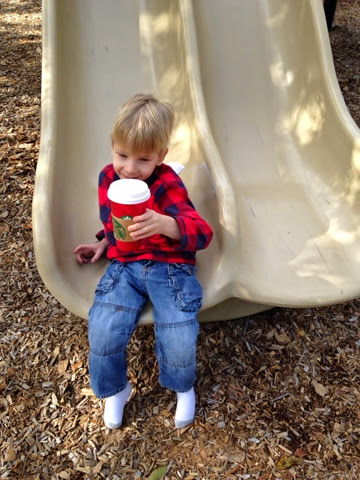 Today at the park holding my coffee for me so I could take a pic:) 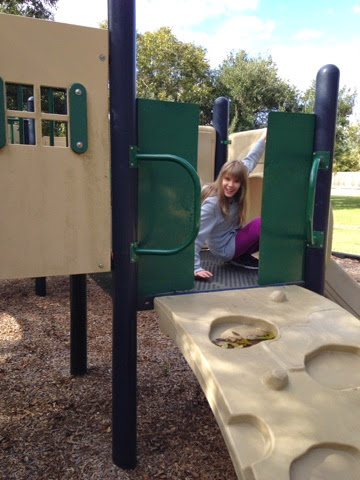 Katya about to slide 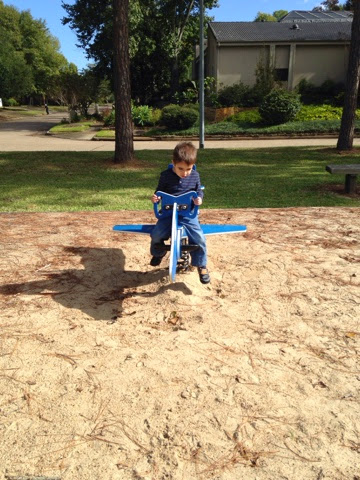 Kaeden on the rocker thingy 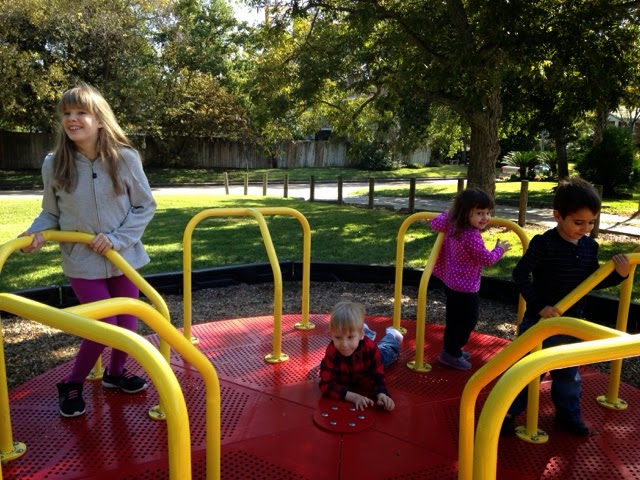 Here's the 4 I had with me today. Callen, Ashlyn and Lesia were at school.
Posted by Crissilea at Wednesday, November 19, 2014 No comments:

Every few months I get a short letter via email or facebook from our sweet girl we hosted in the summer of 2012 who's in Crimea.
They remind me she hasn't forgotten us and still thinks of us:) not a day goes by that Jared and I don't think of her and miss her. We keep holding on to the hope that someday we will see her again. 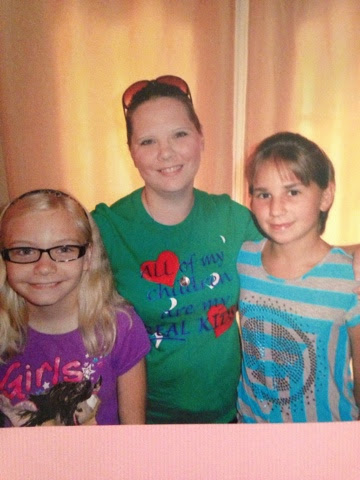 Posted by Crissilea at Tuesday, October 28, 2014 No comments:

Katya turned 11 last week! We had a small family party for her here at home. She was a bit confused as to why we were singing to her and giving her gifts! Lol Lesia kept telling her in ukrainian that it was her birthday and these gifts were because of that but she just has no reference to know what we were taking about. Imagine being 11 and never have had a birthday party before:( 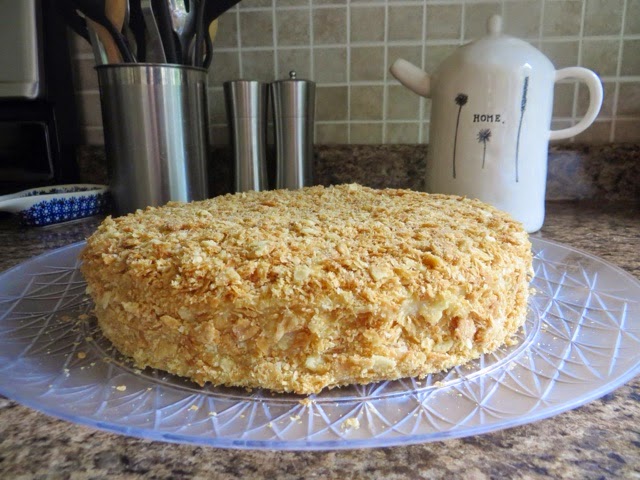 We had a small store bought cake for her that night and pizza (her favorite) but my friend Anastasia who happens to be Ukrainian had her mom make Katya a napoloen cake for her birthday. It's amazing even Jared liked it and he rarely likes any desserts.
Katya is doing really well, she's picking up more english words every week. It's going to be awhile though before she really picks up enough to get by on. She enjoys her siblings most of the time! They of course pester her and make her mad sometimes as all younger siblings do. She and Ashlyn are doing good sharing a bedroom still but Katya likes to keep thinks neat and Ashlyns a slob.....it's been very crazy around here lately and I just don't have the energy to write so that's all for now.
Posted by Crissilea at Monday, October 27, 2014 No comments:

Crissilea
South of Houston, Texas, United States
I am married to the most amazing man Jared. We have 5 children and are in process to adopt one or two more! Our current oldest child is Ashlyn (10) then there's Grayson (4) and Callen (3) who were adopted from Ukraine and landed in the US in May 2013. Kaeden (3) and Savannah (1.5) were both adopted domestically at birth. We are adopting a 10 year old girl from Eastern Europe and possibly a 14 year old girl as well.

Shop with Amazon to help us fundraise! 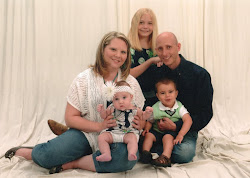 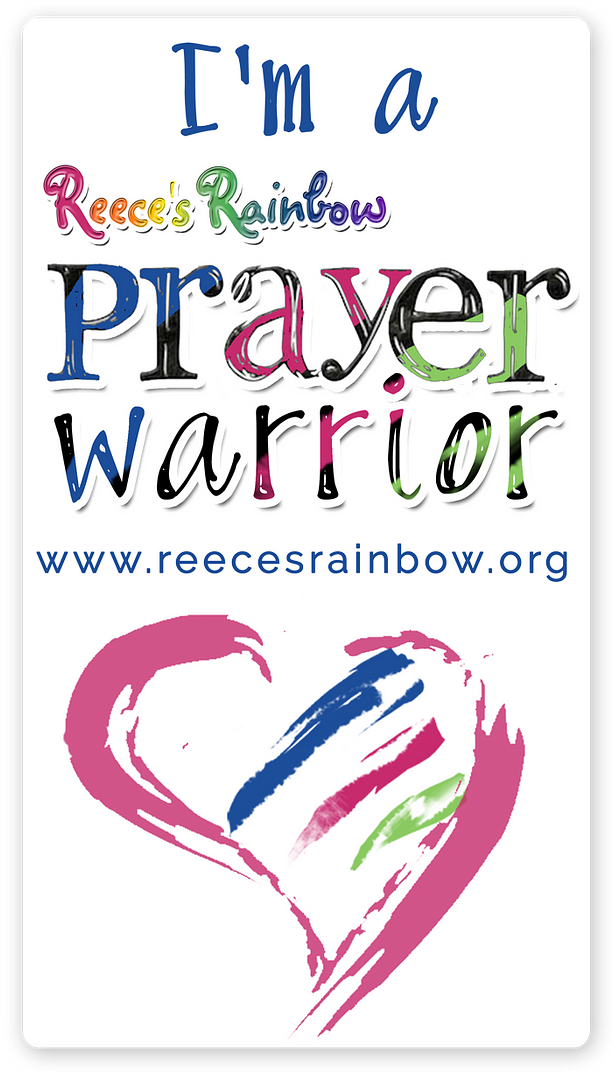